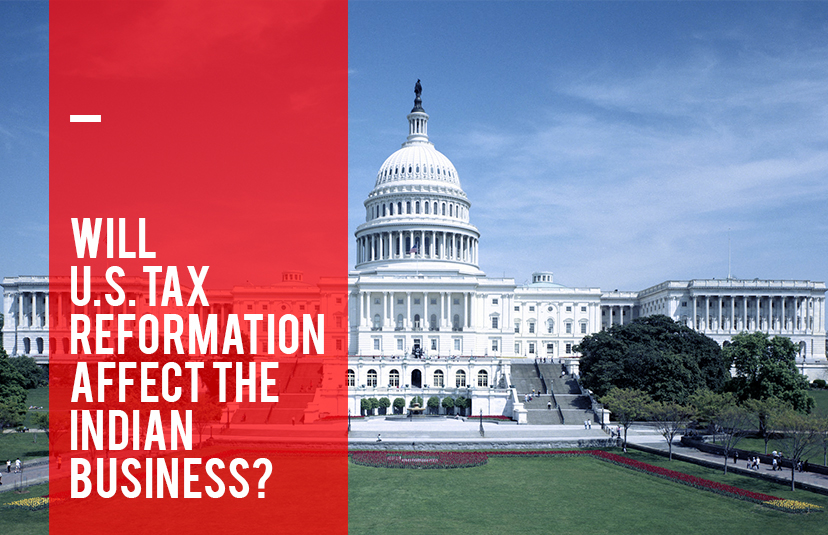 US President Donald Trump signed the Republican tax bill into law at the end of last year, December 2017, and in his words, is “the largest tax cut in the history of (our) country.”It is the first major change done in the tax law in more than 30 years.

Sweeping changes have been made in the existing tax laws and would have lasting implications in all corners of the US economy and everyone included in it. The new tax reform legislates substantial changes in the US, which includes the taxation of businesses in all industries and more notably on multinational enterprises and groups. This presents both an opportunity as well as challenges to multinational businesses in India.

Highlights of the Tax Reform (not limited to the following points)

One of the highlights of the U.S. tax reform is the significant reduction of the existing corporate tax rates from 35 percent to 21 percent. With this competitive tax structure of a 21 percent tax rate, it would project the United States as one of the most coveted destinations for investment. This would result in many businesses with a global footprint to relocate their operations back to the US.

In other words, MNC’s operating in India would start to consider relocating their business back to the US as they would be burdened by the higher tax rate in India.

Trump’s tax reform legislates a change from the current “worldwide” tax system to a “territorial” tax system. Under the “worldwide” tax system, multinational companies were taxed on foreign profits earned.  They deferred paying tax until they bring the profits back to the US. As a result, many corporations leave it pooled overseas.

Under the new “territorial” tax system, the companies aren’t taxed on foreign profit made overseas. Businesses having their profit overseas will see a significant tax rate cut, meaning the enterprises can defer paying federal tax, leading them to more likely to reinvest it back to the United States. Experts argue that Pharmaceutical and High-Tech companies will be benefited the most as a result of this legislature.

To help with the transition, Uncle Sam will compulsorily levy a one-time, low tax rate on profits retained overseas, depending on the nature of assets in which the overseas profits are retained—15.5% on cash assets and 8% on non-cash assets. This law comes with an option to pay the tax in simple installments over a period of time.

This could potentially increase the move of overseas capital back to the US, as the tax reasons for keeping the profits outside of the US in a complex structure no longer remain viable. This could create a significant cash pool available to the US entities. Amongst other things, this could also mean that investment functions could increase shaking the US and global economy alike.

This is a notable negative change—this law is to prevent USTax Base Erosion, by levying an additional tax on all payments (other than interest) made by US companies to their overseas associates. Currently, this tax rate is capped at payments above a particular threshold. The US entity’s average annual gross takings for the past three years should exceed $500 million for the tax rate to be applicable. BEAT is 5% for 2018, 10% for 2019 to 2024 and 12.5% from 2025 onwards.

This will negatively impact the costs of offshoring and outsourcing to entities outside the US significantly affecting Indian businesses, especially in the IT and pharmaceutical industry as a large amount of back-office and R&D work is outsourced to India from the US. This will increase the costs of operating globally.

Bottom-line: The restructuring of the tax laws helps businesses more than individuals. The tax cuts for Businesses are permanent.

It is important for businesses in India to understand these important changes in the US Tax reform in order to function smoothly, as undoubtedly, the reforms will affect the world economy in the long run. Indian groups must carefully plan their actions and make arrangements that include significantly restructuring the way they conduct business globally in the US. With proper planning and business advisory from a Business Consultant Company, Indian companies can fully benefit from all the positive aspects of the new US tax laws while learning to maneuver the negative aspects.

Ourbusinessladder is a business consulting company, specializing in market research and business advisory.

Architecture Business — Now and Then